When poor gait mechanics are observed and symptoms increase in severity and/or reemerge upon walking, the concepts of Gait Inhibition, PALO Alto, and PiLUS should always be considered and evaluated.

Normal gait patterns continually warrant the facilitation of some as well as the inhibition of other muscles to allow proper motion to occur. After injury or fatigue sets in, this normal process of Gait Inhibition may not occur and muscles that should inhibit during gait remain facilitated. This segment will demonstrate how to assess for patterns that are evident only during gait and may otherwise go unchecked.

PALO Alto testing assess for the coordination between contralateral upper and lower body limbs in various planes of motion. While a muscle or movement may be perfectly functional in isolation, it may show an aberrant response when working in conjunction with the rest of the body in a gait like fashion. Learn how to locate these dysfunctions and treat the corresponding causative receptors located on the foot of the ipsilateral lower body limb.
PiLUS, an acronym standing for piriformis, iliacus, latissimus dorsi, upper trap, and sternocleidomastoid, is indicated in any situation where overstress on the dura is present. Building off the original hypotheses of Illi and Kapanji, the concept of PiLUS states that each muscle in it’s acronym should naturally inhibit with the patient in over 20 degrees of flexion or extension to avoid overstress on the dura. This effect is seen due to the opening of the pars articularis of L5/S1.

When working with Golgis, the Temporal Sphenoidal line can provide a convenient alternative as a proxy for the Main Secondary. Learn how to utilize the TS line as both a new diagnostic and treatment tool.

No reviews found! Be the first to add one.

You must be logged in to submit your review! 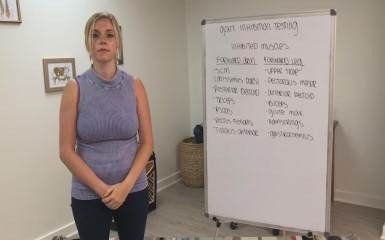